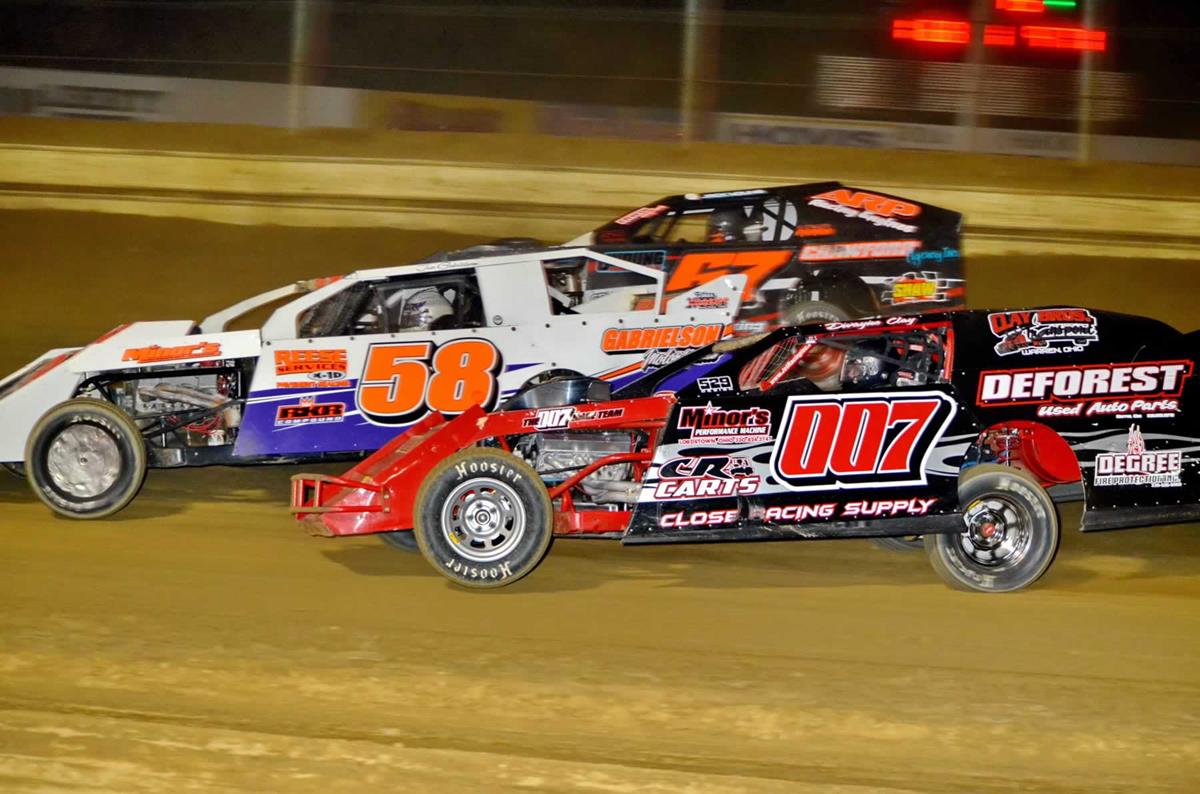 Cars that didnâ€™t complete on September 11 are permitted to race in all of the divisions. New cars will draw pills to determine their starting order behind the qualified cars. Qualified cars that will have a driver change on Saturday will force that car to start behind all of the qualified cars, but ahead of any new cars.

The Mod Tour returns for their second visit of the season as part of the â€œRuss King Memorialâ€? on Saturday in a complete show paying $2,000 to-win. Rex King, Jr. won the first appearance back on July 11 in the â€œLou Blaney Memorialâ€?. King, Jr. came up short to his father on repeating his Hovis Auto & Truck Supply championship, but would love to close out the season winning his first memorial race for his grandfather. Rex King is the current Mod Tour point leader after the last event at Eriez Speedway won by Kevin Bolland, which was his first since returning to racing this year.

To date, there have been 29 â€œRuss King Memorialâ€? events run with 15 different winners. The late Lou Blaney leads the win list at five. The top active racers include King, Jim Rasey, and last yearâ€™s winner Jim Weller, Jr. with three wins each, which is tied for second with the retired hall of fame racer Bob Kraus. Steve Feder and Ricky Richner scored upset wins in 2012 and 2013 for their first career wins at the speedway. One of the biggest upsets took place in 2008 when the â€œ358â€? of Lonny Riggs won his first career Sharon feature!

Back on September 11, Max Blair set fast in $100 Bobby Lake Motorsports â€œShock the Clockâ€? Qualifying for the Sweeney RUSH Late Models in their Tour event with a lap of 16.419. Blair, Will Thomas III, and Steve Lowery earned $25 for their Bobby Lake Motorsports heat race wins. Charlie Duncan won the K&N Dash and earned the pole for the 30-lap, $2,000 to-win feature. Twenty-two cars were in the pits with several more planning on attending Saturday.

The Gibson Insurance Agency Stock Cars had the biggest field of cars with 47 in the pit area for the Penn-Ohio Series event. Heat wins went to Shaun Hooks, Andy Buckley, Rusty Moore, Tim Bish, and Steve Dâ€™Apolito. Moore also won the $500 to-win â€œJim Hooks Memorialâ€? Dash event. There will be two B mains and the 25-lap feature paying $2,000 to-win Saturday.

Mike Kinney and Joel Watson won the two heat races for the Summit Racing Equipment Modifieds. Just 12 cars were on hand for the $2,000 to-win event. Track champion Greg Martin and RUSH Sportsman Modified Tour point leader Larry Kugel were heat race winners in the Weller Hughes Developing & Contracting division that will race for a record $800 to-win as 13 cars were on hand.

The 50/50 and beer proceeds will benefit the Jacob Lewis Memorial Fund/New Hope Racer. King Motor Sports joined forces with Jones Performance, Moore's Auto Body, Bicknell Chassis, and McCool Graphics to manufacturer the race simulator. The goal is to have one in every children's hospital in the country as they are getting their IV therapy. In 2015, the Jacob Lewis Memorial Fund developed a new program. If an organization or business does a charity event with the proceeds being donated to the Hope Racer project in excess of $3,000 that organization will receive a car with their logo as the design and get to choose what children's hospital receives the simulator. The Mod Tour drivers will be doing their helmet collection during the redraw and 100% of the money collected goes to fund the Hope Racer Project.

Pits open at 3 p.m. with grandstands at 4. Warm-up/group qualifying for the Big-Block Modifieds will get underway at approximately 5:45 p.m. with racing to follow at 6.

For those without rain checks or two-day passes, grandstand admission is $15 for those 14 and other and pit passes are $35. As always, children under 13, parking, and camping is always FREE! Sharon has a no carry-in cooler policy.