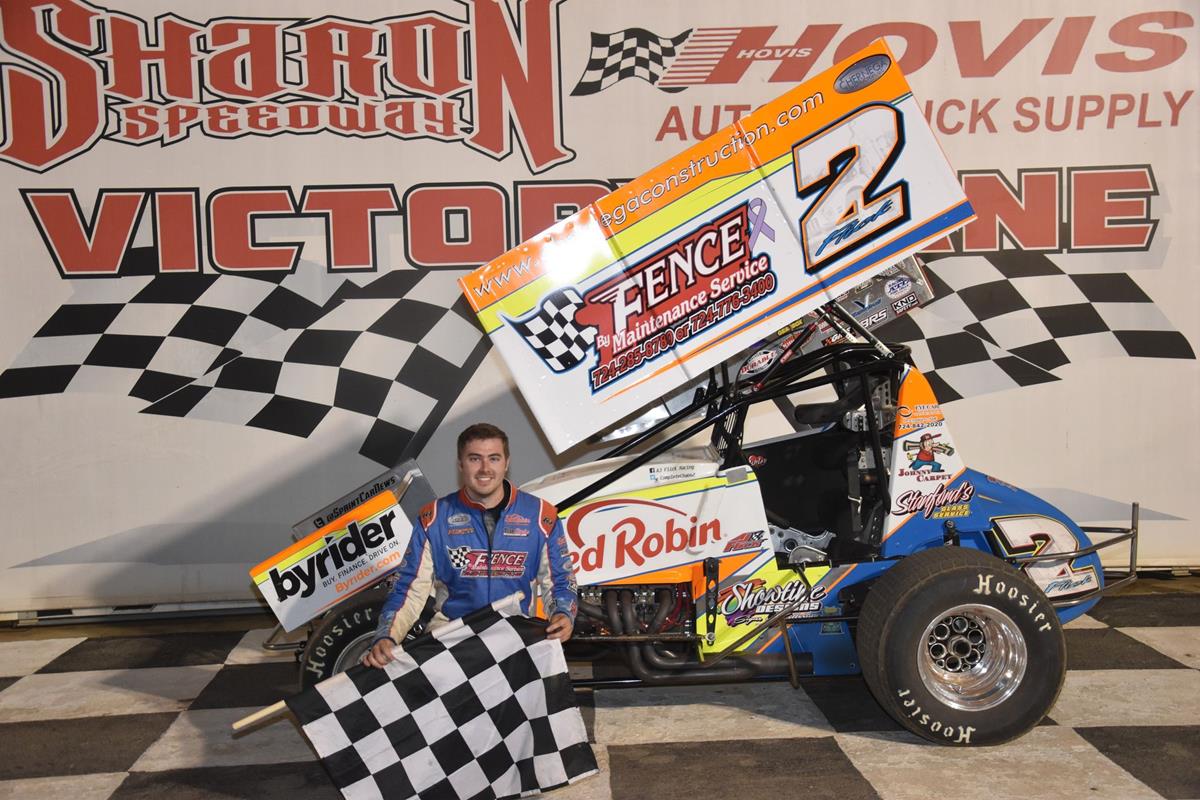 After picking up his first Sharon win of the year back on June 4 during his sweep of Western PA Speedweek, A.J. Flick continued his stellar 2022 season with another 30-lap Hovis Auto & Truck Supply "410" Sprint Car win. The 29-year-old Apollo, Pa. driver passed Bob Felmlee on lap eight and went on for the $3,100 victory- his eighth overall of the year.

Felmlee and Dan Kuriger traded the lead early before Kuriger took command. Kuriger was fresh off a "410" Sprint Car win one week ago at Pittsburgh's PA Motor Speedway; however, he'd suffer a heartbreak when he couldn't avoid the spinning Randy Wyant on lap five. Felmlee regained the lead in his bid for his first win since his return to racing, but fourth starting Flick put a quick end to those hopes taking the lead on lap eight.

Flick survived some mid-race cautions and kept fifth starting Brandon Spithaler at bay over the second-half of the event for his third career Sharon win in his Ferguson Heating & Air Conditioning/Fence by Maintenance Service/Red Robin/Chernega Construction-sponsored #2. Spithaler, who had the night off from All Star Circuit of Champions competition in Bryan Grove's #28, was aboard his own #22 and was banging the fence trying to stay within striking distance, but the final deficit was 2.201 seconds. Hobaugh was third, while Felmlee dropped to fourth. Carl Bowser went 10th to fifth.

Sixth through ninth were Dan Shetler, Brandon Matus, Leyton Wagner, and Adam Kekich aboard Bob McMillin's #5. After getting to the track late and missing the heat races, Brett Brunkenhoefer raced his "305" powered Sprint Car from 21st to 10th to earn the $100 Summit Racing Equipment hard charger gift card. Spithaler set fast time over the 21-car field in qualifying with a lap of 15.736. Heat winners were Kuriger and Flick.

They always say the first one is the hardest. After finally getting his first career RUSH Sprint Car win at Sharon last Saturday night in year number four of the division, Gale Ruth, Jr. made it two straight victories on Saturday night. Ruth's 19th career win in the division came in the 20-lap Terry Bowser Excavating sponsored feature and was worth $700.

While the 44-year-old Pleasantville, Pa. racer led from green-to-checkered, you could throw a blanket over the top six for much of the event. Ruth, who also won a "410" Sprint Car feature in his own #5x back in 2010, wheeled the Rich McConnell-owned, Rustler Sales & Service/Krill Recycling/Economy Landscaping/Boice's Auto Sales/Fat Chad's Taproom & Steakhouse/Knox Bakery/Matus Motorsports-sponsored #24 to the victory by just 0.954 seconds.

Kugel took over from Scott Stiffler on lap two and held the spot until 50' from the finish line when 11th starting Bish made the thrilling pass. Bish, who won the 2019 $10,000 "Steel Valley Pro Stock Nationals", upped his Sharon career win total to seven aboard the Bernard's Electrical Service & Troubleshooting/R.K. Virgile Scrap Metals/Double E Landscaping & Fencing-sponsored #29.

Garrett Calvert has shown a lot of speed the last two season at Sharon in the Econo Mod, but had never been able to break through into victory lane. That all changed on Saturday night as the second generation racer passed race-long leader Gary Olson on lap seven and went unchallenged to the 20-lap Whelen-sponsored feature win worth $550.