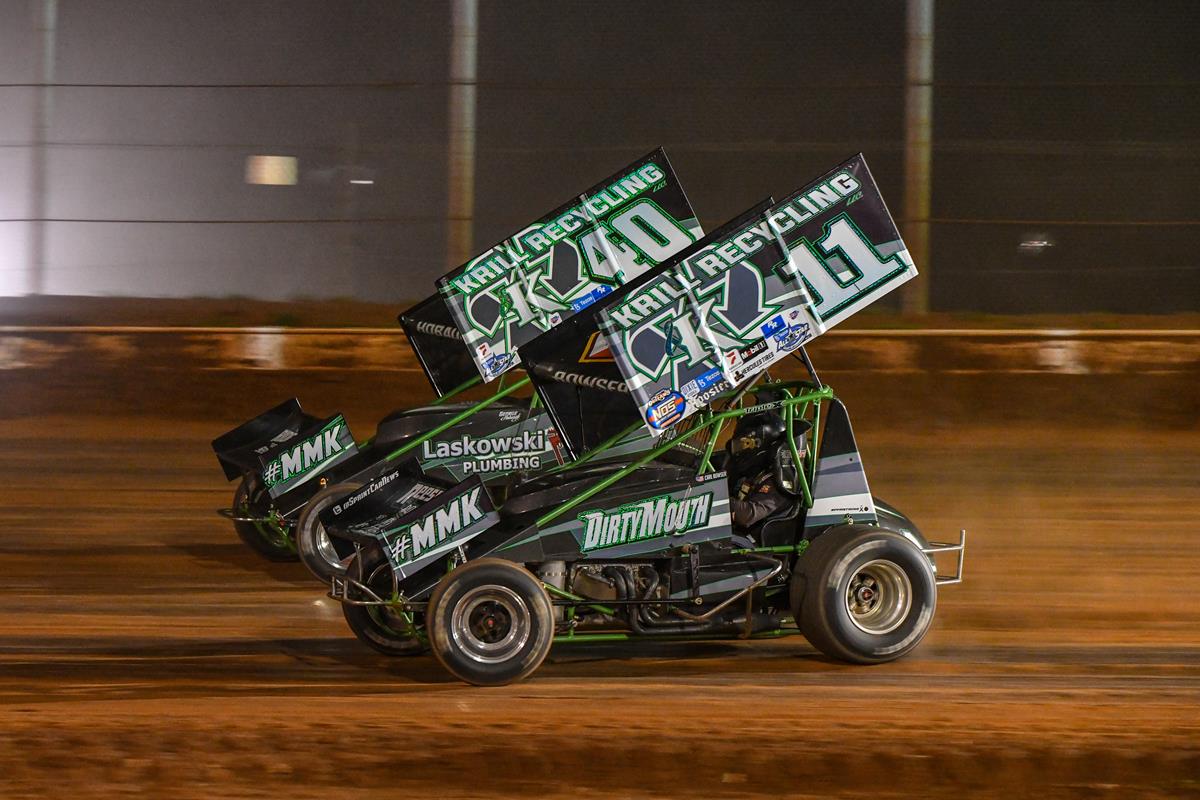 Cap Henry opened the season winning Saturday's $6,500 All Star show for his second career Sharon win. Saturday will be the first non-sanctioned "410" Sprint Car show of 2022. While $3,000 to-win, $250 to-start has again been posted as in years past, all of this year's "Super Series" events have been increased $2,400 with positions 2-20 seeing a raise! See complete payoff below.

The 2021 season started off with nine different winners in the first nine "410" Sprint Car races before Carl Bowser became the first repeat winner with the first two victories of his Sharon career. Bowser's teammate, George Hobaugh, was one of the 2021 winners and on Saturday night led the first 28 laps of the feature in search of his first career All Star win before fading to fifth at the finish. Like Bowser, Hobaugh also owns two career Sharon victories. Dave Blaney's 34 "410" victories at Sharon are the most amongst active racers.

The competitive Gibson Insurance Agency Pro Stock division not only has the highest average weekly car count of any regional speedway running the Stocks, but also boasts the highest payoff. This year if there are 24 or more cars, the Stocks will compete for $750 to-win, $85 to-start! Curt J. Bish won the last two track championships and now owns six career wins including the 2019 $10,000 "Steel Valley Pro Stock Nationals". Sharon utilizes Penn-Ohio Series rules as drivers can earn points towards their weekly championship program. Alan Dellinger, who still competes part-time, sits atop the division's all-time win list with 66. Steve D'Apolito's 32 wins are the next highest amongst active racers.

Like the Stocks, the HTMA/Precise Racing Products RUSH Sportsman Modifieds will be making their Sharon season debut on Saturday night. This year will mark the ninth year of existence for the division, which has averaged over a full field of cars annually at Sharon. If there are 24 or more cars, the RUSH Sportsman Modifieds will compete for $550 to-win, $85 to-start in 2022.

Hovis Auto & Truck Supply presents the RUSH Sportsman Modified Weekly Series Championship that pays the top 20 RUSH member drivers for their best 12 races across the region with $3,500 going to the champion. Saturday's show kicks off year three of the "Route 7 Rumble" Series Championship presented by Wedge Motorsports. That Series takes into account all races run between Sharon and Raceway 7 as the top eight drivers will share in the $2,500 point fund with $1,000 going to the champion.

The Whelen Econo Mods round out the four-division show on Saturday night. The Econo Mods joined the All Star Sprints last Saturday at the opener, and it was Jeremy Double earning his 17th career win. Double will look to go two-for-two on Saturday and inch closer to Brandon Blackshear's all-time leading total of 21 wins in the division. If there are 24 or more cars, the Econo Mods will compete for $450 to-win, $80 to-start in 2022.

Summit Racing Equipment will present the hard charger award on Saturday night to the "410" Sprint Car division. The driver that passes the most cars in the feature will receive a $100 Summit gift card. In the event of a tie, the tiebreaker will be the driver that finished highest in the feature.

The pits will be open throughout the afternoon with passes going on sale at 4 p.m., while general admission opens at 5. Pill draw for the "410" Sprints will close at 6 p.m. with the other divisions at 6:15. Motor heat for the Sprints will be at 6:15 p.m. followed by group qualifying at 6:30. Heat races will begin at 7 p.m.

Coming up next Saturday (May 14) will be another "Super Series" event featuring the "410" Sprint Cars for $3,000 to-win along with the first appearance of the season by the non-wing RUSH Sprint Cars, HTMA/Precise Racing Products RUSH Sportsman Modifieds, and the Whelen Econo Mods. Race time is 7 p.m.