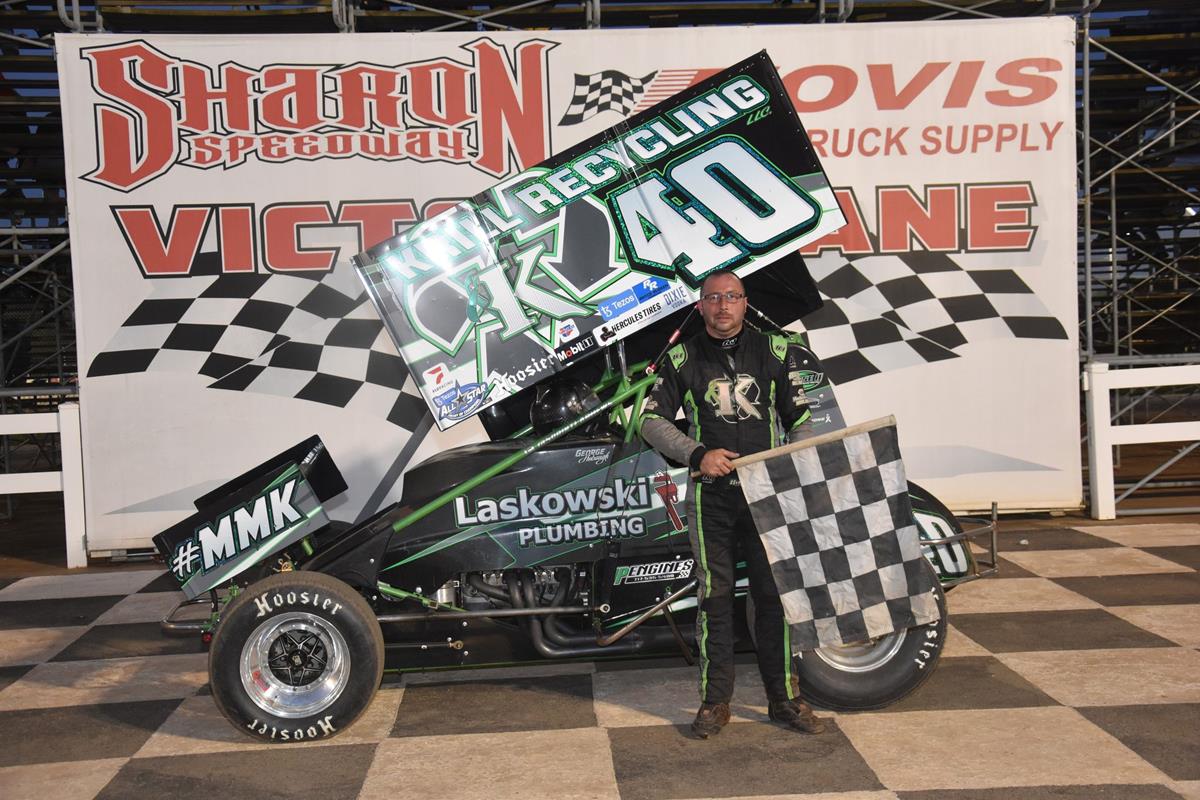 George Hobaugh started ninth, passed teammate Carl Bowser with four laps to go and held off a big last lap charge by Dan Shetler to score the popular 30-lap Hovis Auto & Truck Supply "410" Sprint Car feature victory. Hobaugh earned $3,000 for his third career Sharon victory, which came nearly four years after winning his first ever in a "410" from the ninth starting spot as well on August 6, 2018. Hobaugh will go down in history as winning the 700th all-time "410" Sprint Car feature held at Sharon.

"I feel bad for Carl (Bowser)," stated the 39-year-old Karns City, Pa. driver. "If that caution hadn't come out that was all his. He's been having a rough year, but has been really fast the last couple nights. It's a very torn situation. It's tough no matter who you're racing with whether it's the Outlaws, All Stars, or locals. This track puts on a phenomenal show; it was great and had multiple lines of racing. I didn't think honestly think I had a chance to win from ninth, but here we are!"

Bowser used the outside to fly into the lead past Logan McCandless on the start, while Darin Gallagher went fourth to second as Greg Wilson was also able to get by McCandless for third. Bowser had opened up a three-second lead when he caught lapped traffic on lap seven. While Bowser continued to lead over Gallagher and Wilson, a four-car battle ensued for fourth with Bob Felmlee trying to fend off Shetler, Hobaugh, and Brandon Spithaler. Shetler made the pass of Felmlee for fourth on lap 11. Wilson meanwhile had been working on Gallagher and finally made the pass stick for second on lap 13, but Bowser now had built up a 5.3 second advantage.

After finishing second on Friday night at Lernerville, Gallagher was looking for another podium but slowed to bring out the caution with 17 laps scored. Hobaugh had already worked his way by Shetler and Felmlee then inherited third from Gallagher. Hobaugh then slipped past Wilson for second on lap 19 with Shetler following in third two laps later.

Hobaugh closed in on Bowser on lap 24 and two laps later pulled a slider in turns one and two to take over the top spot on lap 26. Shetler followed taking runner-up from Bowser two laps later. Shetler made up a ton of ground over the final two laps as he was about a half-second faster. Shetler got a big run on the bottom of turns three and four on the final lap, but came up just 0.157 seconds shy of Hobaugh's Krill Recycling/Laskowski Plumbing/Ridgeview Security/Hobaugh Auto Parts/Hobo Storage-sponsored #40.

Bowser dropped to a disappointing third after leading the first 25 laps in search of his first win of the season. Wilson edged out Spithaler for fourth. Dan Kuriger, Felmlee, 14th starting Darren Pifer, Brett Brunkenhoefer, and Adam Kekich completed the top 10. Bowser set fast time overall in qualifying with a 15.067. Heat winners were Shetler and Spithaler.

Bobby Whitling ended more than a three-year winless drought by leading wire-to-wire in the 20-lap Gibson Insurance Agency Pro Stock feature. The 2000 track champion kept former UMP Modified standout, Scott Stiffler, at bay for much of the feature for his first Sharon win since May 18, 2019 and became the fourth different winner in five races this season.

"It helps starting on the pole obviously but I kind of got out there and got into a rhythm, kept the car straight and never seen anyone so it worked," revealed the 49-year-old Franklin, Pa. racer. "I'm glad to pick up a win here as it's been awhile. First off I have to thank my brother. He's my partner in this; without him I wouldn't even be racing right now. Also my son, and the kids, we're all involved in this along with all the sponsors that make this possible."

Whitling and 70-year-old Larry Kugel led the field to green with Whitling taking the advantage over Kugel, while Stiffler went fifth to third. The event's only caution was for Will Thomas III, who was making his second Pro Stock start, as he spun running in fourth with two laps scored. When racing resumed on lap three, Stiffler took over second from Kugel. Sixth starting Curt J. Bish drove around Kugel for third on lap five.

Whitling and Stiffler distanced themselves from the field as Bish would never get close enough to challenge. Whitling's fourth career Pro Stock win and fifth overall at Sharon came by 0.839 seconds in his Dulaney's Garage/World of Wheels/Virgile Iron Steel/Bish Heating & Cooling/Precise Racing Products/Jed's Racing Engines-sponsored #7w.

Stiffler's runner-up was his best in a Pro Stock. Bish, who is the division's only repeat winner this season, was third. Jason Longwell went seventh to fourth over Jordan Perkins. Jonathan Davis beat out his father Paul, who started 11th, for sixth. Completing the top 10 were Thomas, Kugel, and Jason Johns. Heat winners were Thomas and Perkins.

JC Boyer emerged victorious in a thrilling finish to the 20-lap caution-free HTMA/Precise Racing Products RUSH Sportsman Modified feature. Boyer slipped under standout Garrett Krummert in the midst of heavy lapped traffic racing in turn four and out-dragged Krummert to the checkered flag to capture his first career victory by just 0.024 seconds! Boyer became the fifth different winner in five races this year and third driver to win his first ever at Sharon. The event's non-stop time was 6:55.657.

"This feels so good to finally get one," expressed the 28-year-old Burghill, Ohio driver. "We've been trying hard, working slowly to get there, and taking the year to understand everything which has helped me out a lot. I'm excited. My parents are in town out of Florida for the weekend so it's pretty cool to get one with them here. I was following Tony (Tatgenhorst) and it seemed like he'd push out coming out of the turns and I'd do the same. Then I saw Garrett on the outside of me and thought if he can get up there, I can get up there. He did a heck of a job up there, but as soon as we got to traffic I started to get to him. We sent it in coming into (turn) four, hammered on it and just wanted to see what would happen. I had no idea who won and had to look at the scoreboard coming down the backstretch."

Tony Tatgenhorst took off in the early lead over Boyer, fifth starting Justin Shea, and Krummert from sixth. While Boyer was all over Tatgenhorst in the race for the lead, Krummert was working hard on Shea for third on lap six. Krummert finally cleared Shea off the top of turn four on lap seven. Krummert quickly ran down Boyer and drove by him off turn four as well on lap nine. Krummert then raced side-by-side with Tatgenhorst on lap 10 before making the outside stick for what most figured was the winning pass.

Boyer though didn't go away as he snuck past Tatgenhorst for second on lap 13. Boyer stayed within striking distance. Krummert caught lapped traffic on lap 17 as Boyer began to close in. Boyer was right there in the final laps. Krummert got hung up in turns three and four in traffic on the final lap. Boyer ducked low and at that point it was a drag race to the finish in heavy traffic with Boyer eeking out a popular win in his Commandoughs Pizza/L&M Processing/Rotuna Excavating/JT Alexander Trucking/Kelly-Cummings Funeral Homes/Ohio Intra Express/A.O.K.-sponsored #12.

Tatgenhorst crossed the line in third, but made heavy contact with Dave Price, who was in the middle of the battle between Boyer, Krummert, and other lapped cars at the finish. Shea was fourth with Rob Kristyak fifth. Ben Easler went 11th to sixth to earn the $100 Summit Racing Equipment hard charger gift card. Rounding out the top 10 were Josh Deems, Jacob Wolfe, 13th starting Kole Holden, and Doug Rutana. Shea and Krummert won the heat races over the 20-car field.

Opening night winner, Jeremy Double, became the season's first repeat Econo Mod winner. Double led all 20 laps of the Whelen feature, but it wasn't easy as he had to fend off seventh starting Will Thomas III on two late race double file restarts.

"We had everything working well and the car was pretty easy to drive," explained the 26-year-old Bristolville, Ohio driver. "It worked out all good on the invert. I thought we were going green-to-checkered. I was hoping we were as soon as I got cleared of lapped traffic then the caution came out. That made me nervous with the restarts and games being played, but it didn't matter."

Double used the outside to take the lead over Jarrett Young with Garrett Calvert, Brian Toto, and Thomas in tow. Double stretched his lead to a full straightaway by lap three, while the battle was on for second. Young had his hands full with Calvert, Thomas, Toto, and Jacob Eucker on lap six. Thomas continued to move forward getting by Calvert for third on lap nine. One lap later, Thomas snuck under Young for second.

Double had a huge 5.7 second lead by the time Thomas got to runner-up at the halfway point. Two cautions slowed action with 13 and 16 laps completed. This gave Thomas two shots alongside Double for the double file restarts. Double though was too strong as he backed up his Friday night win at Raceway 7 with his 18th career Sharon win by 0.612 seconds in his 2 Brothers Motorsports/King Bros./Wedge Motorsports/Russ King Racing/Malone Diesel/Bala Management/Honey Labs-sponsored #83.

Thomas' bid for his seventh win in nine tries in the Econo Mod over the past two years came up short. Young was third over Eucker. Calvert dropped to fifth. Sixth through 10th were Scott Burk, Jr., Andy Buckley, Jordan Simmons, Daniel Moffitt, and Bryan Wagner. Heat victors over the 21-car field were Thomas, Young, and Double.