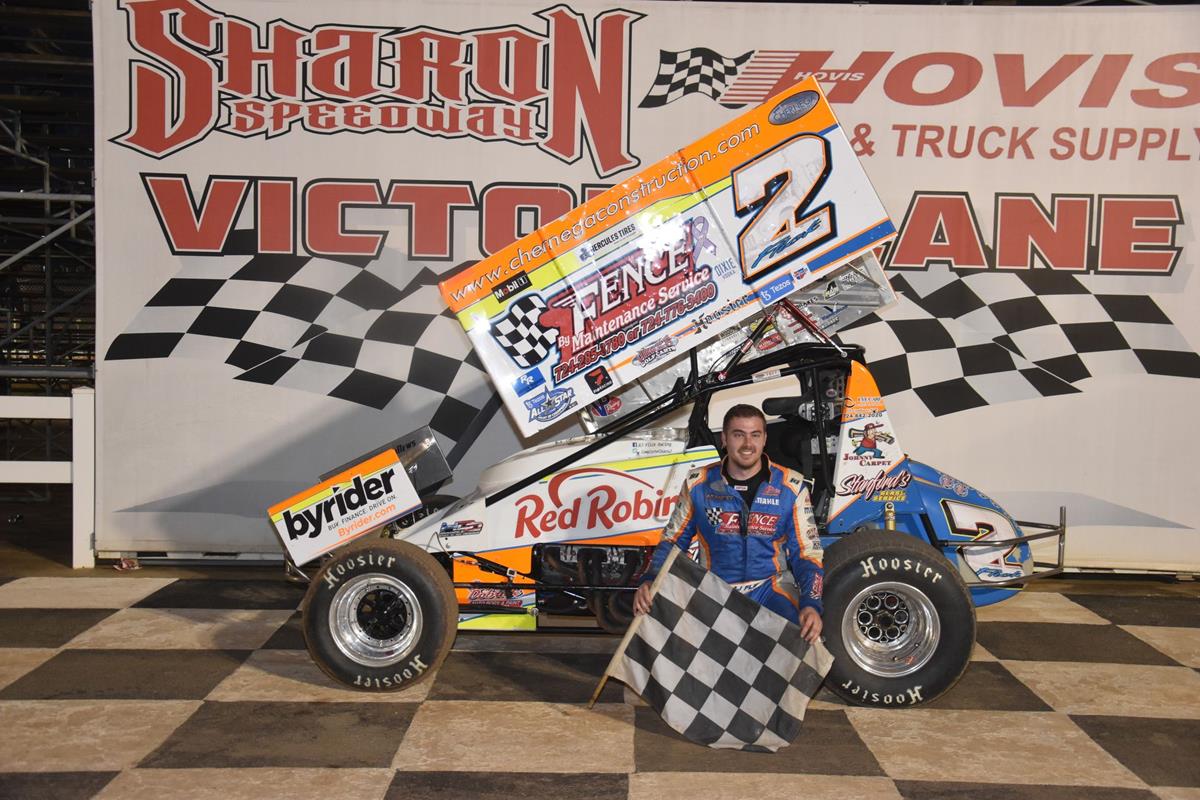 A.J. Flick has taken a liking to Sharon Speedway in 2022. Flick passed last week's winner, George Hobaugh, coming to the white flag to earn his third "410" Sprint Car win in as many starts at the track this season. Flick's 30-lap Hovis Auto & Truck Supply feature win was worth $3,000, and was his 11th overall "410" Sprint Car win of 2022!

"Three-for-three is pretty cool," expressed the 29-year-old Apollo, Pa. racer. "I tried to be as patient as I could, but every single time I hit the bottom and needed to get a run on him (Hobaugh) there was a lapped car there. It had to happen six, seven or eight times. I had him going into the bottom and then the 29 (Logan McCandless) was there. He wasn't taking up anyone's lane, he was just doing what he needed to do. It was just bad timing or whatever and that's how races play out sometimes. I think I was doing a good job on the bottom, keeping my momentum up, and the wing back. I showed George the bottom and he runs around here on the bottom. I was able to get him off my line in turns one and two, was able to hit it pretty hard one lap and was able to roll down the backstretch and get him in (turn) three."

"I almost junked a car in turn two a couple times the way we were racing," added Flick. "If we ever come here against the Outlaws or All Stars that's exactly what those guys are going to do so I needed to push my limits and see what kind of abilities I have and tonight it paid off for us. I have to give a shout-out to Sharon's officials. When this track has moisture in the top and bottom, it's the best race track in the area. Thank you to all you fans for coming out. When I woke up this morning I didn't think anyone was going to race within a 300-mile radius."

Flick started fifth and moved into fourth on the opening lap. Flick then grabbed third from Cody Bova on lap two and took over runner-up from Carl Bowser on lap 10. After some half-dozen attempts at overtaking Hobaugh throughout the rest of the event, Flick's winning move came on lap 29 to earn his fourth career Sharon win in his Ferguson Heating & Air Conditioning/Fence by Maintenance Service/Red Robin/Chernega Construction-sponsored #2.

After his $3,000 win the week before, Hobaugh earned $1,300 for second place. Bowser was third for $1,000 for the second straight week. Sodeman returned to Sharon for the first time since his only start of the season on June 4 and finished fourth after starting seventh. Brandon Matus was fifth. Completing the top 10 were Brandon Spithaler, Dan Kuriger from 11th, Vivian Jones, Darren Pifer, and Bob Felmlee from 15th as he received the $100 Summit Racing Equipment gift card for being the hard charger. Flick set fast time overall in qualifying with a lap of 14.846. Heat winners were Matus and Flick.

Will Thomas III doubled up winning both the Econo Mod feature as well as the Pro Stock main event! Thomas topped a season high 28-car field for his second Econo Mod victory worth $450 then jumped in his new Pro Stock and won the 20-lap $550 to-win Gibson Insurance Agency feature for his first career win in that division in just his third start! Both wins came in Hallman Originals/Colonial Metal Products-sponsored #9 cars.

In the 20-lap Whelen Econo Mod main, Thomas started fifth and made the winning move on Eric Wilson on lap six. Jeremy Double, who became the division's first repeat winner one week ago, passed Wilson for second on a restart on lap 19. Double though would have to settle for second as Thomas pulled away over the final two laps and took the checkered flag first by 1.474 seconds. Thomas has now won seven of the 10 Econo Mod features he's run over the past two years.

"I'm just hoping I have enough gas in me for the Stock Car race," joked the 46-year-old Sharpsville, Pa. ace. "We've been really fortunate in this car all season long, but have only run the Stock a couple times so hopefully we can string together a few good laps."

Scott Stiffler led the first eight laps of the Pro Stock feature until sixth starting Thomas took over on the ninth circuit. Thomas would go unchallenged the rest of the way taking the win by 2.125 seconds over Stiffler, who was runner-up for the second straight week. The two victories on the night upped Thomas' all-time win total at Sharon to 27, which have come in four different divisions; RUSH Late Models (15), Econo Mods (7), UMP Mods (4), and now Pro Stocks (1). Thomas has also competed in the Big-Block Modified, RUSH Sportsman Modified, and Super Late Model divisions at Sharon without being victorious.

"This is a rare feat to win two and real special to do this at Sharon with my wife Tammy and son Willy here," stated Thomas. "I'm just really, really blessed to be surrounded by the people and family I have. I always says I'm blessed to live five minutes away from this place. I've been fortunate enough to do a lot of cool things in racing, but this ranks up there and it's pretty neat. I thought the Econo Mods were tough because of the inexperience, but this is war out there to be honest with you. I'm not used to a lot of contact like in these Stock Cars. Scott (Stiffler) was leading and I saw him getting tighter and tighter. It's not a secret the way I get around here is on the bottom and he kind of opened the door for me and I got by him."

"It was getting stressful at the end with all that lapped traffic," revealed the 15-year-old Linesville, Pa. driver. "I just tried to stay calm, keep hitting my marks, and get through lapped traffic as smooth as possible. I'm just glad we were able to get it done again. I thought Garrett (Krummert) would be there, but I just tried not to think about it getting through lapped traffic and focus on the lapped cars. I kept watching the scoreboard to see the laps ticking down."

After winning his first career feature one week ago, JC Boyer had a solid fourth place after starting sixth. Justin Shea completed the top five from his eighth starting spot. Rounding out the top 10 were Kole Holden, Ayden Cipriano, Rob Kristyak, pole-sitter Jordan Ehrenberg, and a season best run for Dalton Gabriel. Heat victors over the 23-car field were Ehrenberg, Easler, and Krummert.