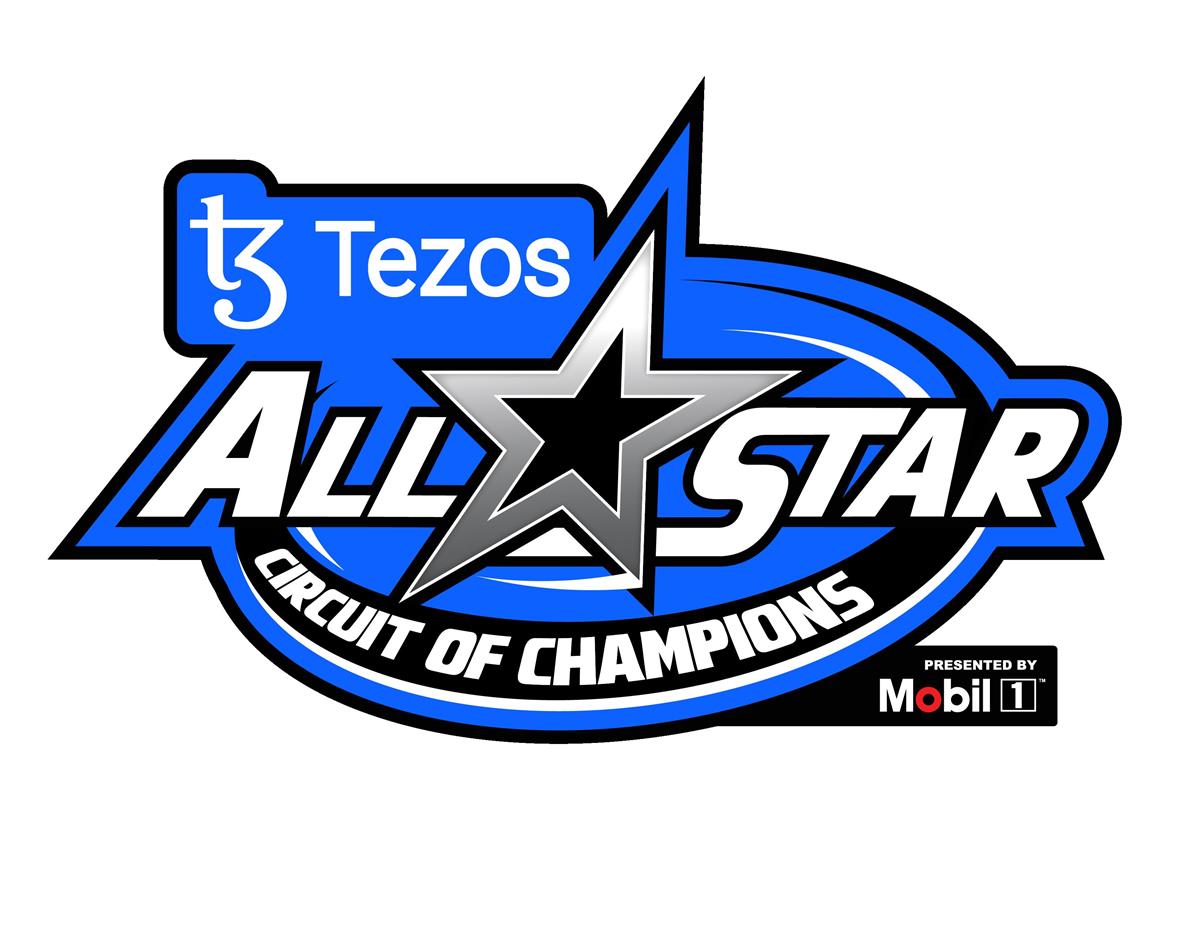 (Hartford, OH)...After 17 years, the long-awaited return of the "Sharon Nationals" is finally here! This Friday and Saturday night (September 2-3), the Tezos All Star Circuit of Champions will highlight the two night affair, which includes the 14th annual "Lou Blaney Memorial" on Saturday night. In addition to the All Stars in competition both nights, Friday night will also include the HTMA/Precise Racing Products RUSH Sportsman Flynn's Tire Touring Series and the Gibson Insurance Agency Pro Stocks, while the BRP Tour for the Big-Block Modifieds will be Saturday night's undercard. Warmups begin at 6:30 p.m. both nights. Special thanks to Bala Management, Premier Pallet, Ryan Blaney, Mobile Bail Bonds, and Jerry Rents LLC for their additional contributions to the event (see below).

Friday night marks the third appearance of the season by the All Stars to the Hartford, Ohio oval as they will be racing in a complete show paying $6,000 to-win. Tyler Courtney leads the $80,000 to-win All Star Championship points by 112 over Justin Peck, who has been red hot of late winning four of the last six point events. Cap Henry won the April 30 show at Sharon, while Christopher Bell topped a 41-car field for the Ohio Speedweek event on June 14. A.J. Flick has won three of the four "Super Series" non-sanctioned events at Sharon this year, while George Hobaugh won the other.

Saturday’s "Lou Blaney Memorial" will celebrate the life and accomplishments of the Hall of Fame driver, who won more than 600 feature victories during a five-decade career. The legend has at least 121 Modified wins and another 11 documented in a Sprint Car at Sharon alone. Blaney passed away in 2009 after battling Alzheimer’s. The Cornhole tournament presented by Stahl Printing & Kirila Fire Training Facilities will take place at 3 p.m. Saturday; participation for that has been filled. All proceeds will benefit the Ryan Blaney Family Foundation for Alzheimer's Awareness. There will also be a Chinese Auction along with the live auction (see current items posted below) that starts at 5 p.m. on Saturday.

A "Lou Shirt Out" will take place on Saturday night. Every person that wears a Lou Blaney shirt will receive five free tickets to be entered into a raffle drawing for a $200 cash prize sponsored by Carpenter's Towing & Colonial Metal Products. Attendees can get their raffle tickets from the tents selling the Lou Blaney Memorial t-shirts. Shirts will be available on Friday night, September 2 for $25.

For the eighth straight year, the “Lou Blaney Memorial” will be under the All Stars’ sanction. This year's event will pay a record $12,000 to-win! In addition, Premier Pallet has posted a $1,000 bonus for the highest finishing non All Star team and Ryan Blaney upped that to $2,200 with an additional $1,200 bonus. Premier Pallet has also added a $100 bonus to positions 10-24 in the feature for all teams.

The Mobile Bail Bonds "Bounty Hunter" bonus will be in effect both night. The following drivers are eligible for a $1,000 bonus if they win the feature on Friday and/or Saturday or a $150 bonus to the highest finisher each night for competing in 75% of the Super Series events: AJ Flick, George Hobaugh, Carl Bowser, Dan Shetler, Adam Kekich, Brett Brunkenhoefer, Brandon Matus, Bob Felmlee, Darren Pifer, Brent Matus, Dan Kuriger, Logan McCandless and Brandon Spithaler.

It took 10 years, but there was finally a repeat winner for the Sprint Car portion of the “Lou Blaney Memorial” in 2018, and it was none other than track owner, Dave Blaney. In 2019, Dave's younger brother Dale captured his first event, while in 2020 year it was Dave's son-in-law, Cale Conley, winning his first to become the 11th different winner in 12 years!

Series owner, Tony Stewart, won the inaugural event in 2009. Mike Lutz was the first local winner taking the 2010 version. Texan Sam Hafertepe, Jr. won in 2011, while Californian Brad Sweet, who was the 2019 World of Outlaws champion, was victorious in 2012. Jack Sodeman, Jr. became the second local driver to win the prestigious event in 2013, while Dave Blaney won his father’s memorial for the first time in 2014. Another WoO racer in Sheldon Haudenschild won the 2015 event. Pittsburgh’s Danny Holtgraver won the biggest race of his career in 2016. Christopher Bell, who has went on to NASCAR glory, won his first race at the track in 2017. Last year, Spencer Bayston became the 12th different winner in 13 years.

The Hovis Auto & Truck Supply Big-Block Modifieds will make their first and only appearance of the 2022 season on Saturday night in a $2,500 to-win BRP Tour event. In addition, Scott Thompson of Bala Management has posted $2,000 that will be added to the purse in various bonus, to be announced. Thus far this season, BRP has completed eight events. Erick Rudolph leads the points with his three victories. Rex King, Jr. is second in points with one victory. Ryan Susice is a two-time winner, while Jeremiah Shingledecker and Garrett Krummert have also been victorious.

There have been 11 different winners in 13 “Lou Blaney Memorial” Modified events! New York legend Jack Johnson captured the inaugural 2009 race, while local Ohio drivers Jim Rasey and Rob Kristyak stole the thunder in 2010 and 2011. Kevin Bolland won the prestigious event in 2012 and fellow western Pa. racer Dave Murdick joined him in 2013. In 2014, Rex King, Jr. won the event part of his dream season, while in 2015 Jim Weller, Jr. added his name to the win list. Rasey became the first repeat winner in 2016. Jeremiah Shingledecker got his first event win in 2017, while New York’s Mike Maresca ended the locals’ run of eight straight event wins thanks to his victory in 2019. Five years after his first win, King, Jr. added his second event win in 2019. Erick Rudolph and Chad Brachmann became the third and fourth Empire State racer to be victorious in the event in 2020 and 2021 respectively.

The HTMA/Precise Racing Products RUSH Sportsman Modifieds will compete in their final Sharon race of the year on Friday night. The event has received a $600 purse increase from Jerry Schaffer, a longtime racer, car owner, and sponsor, with his Jerry Rents LLC business. The 25-lap Flynn's Tire Touring Series feature winner will now receive $1,000 with an extra $100 going to positions two through five! Jerry Rents handles toilet rentals and camper pumping.

Back on June 18, Ben Easler won his first career Touring Series feature. Easler leads both the $3,500 to-win Hovis Weekly Series and the $1,000 to-win Wedge Motorsports "Route 7 Rumble" Series Championships. There have been six different winners in eight races this year at Sharon as only Easler and Cipriano have been able to repeat. Single victories have gone to Tony Tatgenhorst, Justin Shea, Krummert, and JC Boyer. Garrett Krummert meanwhile leads the Flynn's Tire Touring Series points.

Also on the card Friday night will be the Gibson Insurance Agency Pro Stocks racing for $750 to-win. After two weeks off, Friday night will be their eighth race of 2022. Curt J. Bish has been the man to beat winning three of those including the $10,000 to-win "Steel Valley Pro Stock Nationals" on July 16. Other winners include Chris McGuire, Chris Schneider, Bobby Whitling, and Will Thomas III.

Summit Racing Equipment will present the hard charger award on Friday night to the RUSH Sportsman Modifieds and on Saturday night to the Big-Block Modifieds. The driver that passes the most cars in those feature events will each receive a $100 Summit gift card. In the event of a tie, the tiebreaker will be the driver that finishes highest in the feature.

Fans can not only experience viewing from the frontstretch and backstretch grandstands, but also from the infield fan zone. The fan zone, which includes a concession and restrooms, debuted in 2020. Sharon is the only track in the area to have viewing from the unique infield perspective. There will be times throughout the night when fans can cross on the frontstretch back and forth.

The pits will be open throughout the afternoon with passes going on sale each day at 3 p.m., while general admission opens at 4 on Friday and 3 on Saturday. Sprint Car motor heat will be at 6:10 followed by warmups, qualifying, and racing each night.

Grandstand/fan zone admission for those 14 and over is $25 on Friday night and $30 on Saturday night. As always, children under 14 and parking are always FREE. Advanced general admission and reserved tickets are on sale by visiting https://sharonspeedway.simpletix.com/. Pit passes are $35 on Friday night and $40 on Saturday night. Camping for the weekend is $25. Permits must be obtained through the above ticket link. Camping opens at 5 p.m. on Wednesday. As a reminder, coolers nor outside food or beverages are not permitted.

The next event at Sharon Speedway will be on Saturday, September 24 for the World of Outlaws NOS Energy Drink Sprint Cars and the Gibson Insurance Agency Pro Stocks.