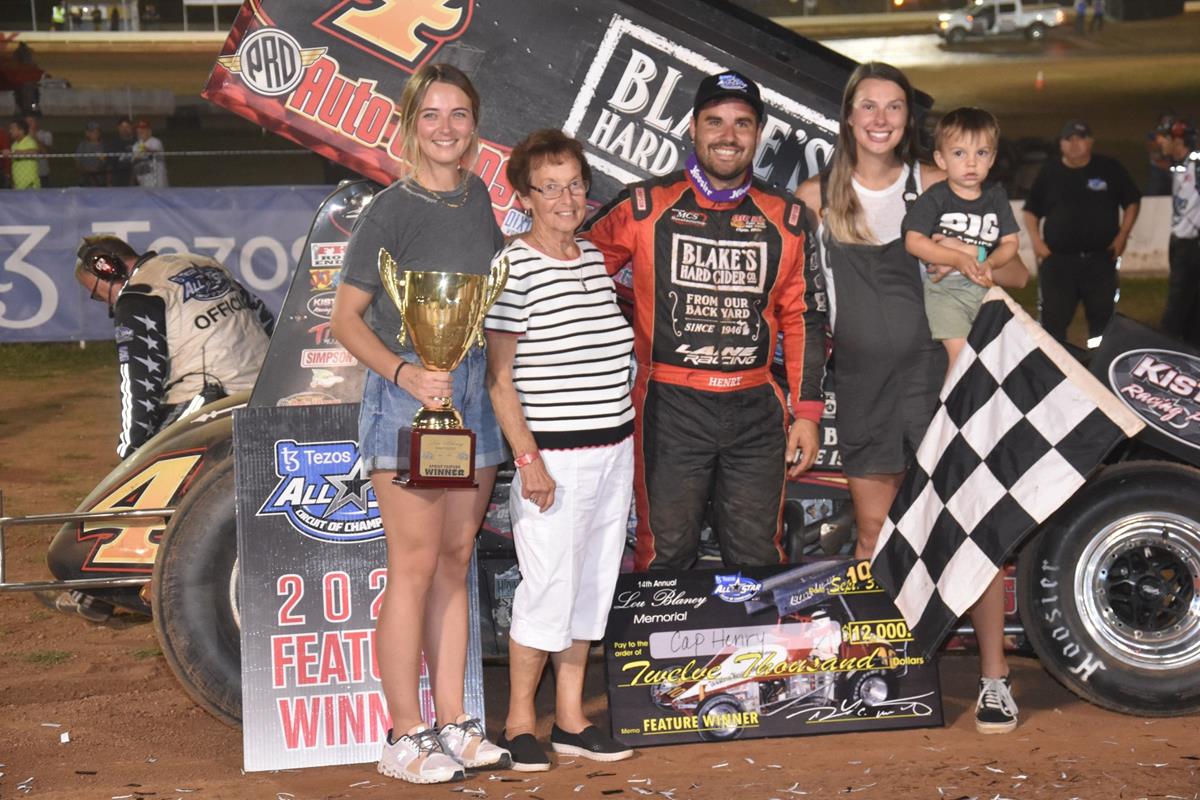 (Hartford, OH)…After a 17-year absence, Sharon Speedway brought back the "Sharon Nationals" over the Labor Day weekend. The two-day event was wrapped up on Saturday night in conjunction with the 14th annual "Lou Blaney Memorial" as the 15th straight race event was completed during the 93rd anniversary season. Celebrating with wins in the Hovis Auto & Truck Supply victory lane were Cap Henry-Tezos All Star Circuit of Champions Sprint Cars and Erick Rudolph-Hovis Auto & Truck Supply Big-Block Modified BRP Tour. There were 70 cars on hand for the two-division show. Thank you to Bala Management, Premier Pallet, Ryan Blaney, and Mobile Bail Bonds for the additional monies. Thousands of dollars were raised for the Alzheimer's Association through various fund raising activities via the Ryan Blaney Family Foundation.

Back on April 30 at Sharon, Cap Henry made a last lap pass of Brent Marks to win the $6,000 All Star event. Henry had been shutout of victory lane with the All Stars ever since, but on Saturday night Henry led wire-to-wire in the 35-lap feature keeping a bevy competitors in his shadow to garner the $12,000 victory. Henry became the amazing 13th different "Lou Blaney Memorial" winner in 14 years!

“This is actually the car I won my very first All Star race with back in 2019…we pulled it out of the weeds this week,” revealed the 32-year-old Bellevue, Ohio native. “I’m just super proud of my guys. We’ve really struggled in the slick this year, especially in the last two weeks. Definitely some trying weeks there. I just really appreciate everyone’s hard work.”

The event's only caution took place on the opening lap when Gio Scelzi lost the handle in turn one and collected Lee Jacobs. When racing got underway, Henry bolted into the lead over Rico Abreu, Justin Peck, Hunter Schuerenberg, and Zeb Wise. Friday night winner, Brent Marks, moved into the top five with his pass of Wise on lap three then three laps later drove around Schuerenberg for fourth. Marks continued his charge as he put a slider on Peck for third on lap eight.

Up front, Henry caught the back of the pack on lap eight, but it took until lap 14 until Abreu was able to close in. By lap 15, it was a three-car race for the lead with Marks joining the battle. Abreu threw a slider on Henry to temporarily take the lead in turn two on lap 17, but Henry was able to sneak back by in turn four to continue to lead. The jockeying around allowed Peck and Schuerenberg to close in making it a five-car race for the lead on lap 18!

While Marks was searching around the track for his best position to attack, Peck drove around him for third on lap 21. Peck then put a slider on Abreu in turn one two laps later to take second on lap 23. Second place though was as far to the front as Peck would achieve as Abreu regained the spot on lap 26 and then Marks took back third on lap 29. Marks was then all over Abreu and made the pass for the runner-up spot with a slider in turn one on lap 31.

Henry though pulled away in the final laps taking the Lane Racing-owned, Blake's Hard Cider-sponsored #4 to his eighth career All Star win by 2.064 seconds. The win was also Henry's third of his career at Sharon, but first in the "Sharon Nationals".

“I knew I had one shot there to get back by him,” explained Henry of his lap 21 battle with Abreu. “I kinda rode his left rear there getting into three. I was really hoping he was going to slide up across the track through three and four and leave the bottom open for me to park it. It just all worked out tonight and I’m super proud of everyone.”

Even though Marks was unable to garner the "Sharon Nationals" sweep, he not only earned $5,000 for second, but also picked up the $2,200 bonus for being the highest finishing non All Star team with $1,200 from Ryan Blaney and $1,000 from Premier Pallet! Abreu was third over Schuerenberg. After challenging for the lead, Peck dropped from second to fifth in the final 10 laps.

After a fourth place finish on Friday night in his first All Star start in nearly 14 months, Dale Blaney raced from 13th to sixth to earn the hard charger in a second Dave Blaney entry. Wise dropped to seventh. After a seventh place finish on Friday night, A.J. Flick came home eighth to earn the $150 bonus for being the highest finishing eligible local racer from Mobile Bail Bonds. Kasey Kahne and All Star points leader Tyler Courtney completed the top 10. Drivers in positions 10-24 received a $100 bonus from Pete Grove of Premier Pallet!

Peck set fast time overall against the 40-car field in qualifying with a lap of 14.715. Heat winners were Abreu, Marks, Henry, and Wise. Abreu also won the dash to earn the feature pole, while Greg Wilson won the last chance B main then went 21st to 14th in the feature.

For the second time in three years, Erick Rudolph copped the "Lou Blaney Memorial" victory for the BRP Tour. Rudolph became the third Big-Block Modified driver to repeat in the event joining Jim Rasey and Rex King, Jr. The eighth starting Rudolph passed Canadian Tyler Willard on lap 21 and went unchallenged for the $2,500 victory in the 35-lap Hovis Auto & Truck Supply feature. It was Rudolph's fourth BRP Tour victory of the season as he expanded his points lead.

"He's (Lou Blaney) an icon of the area and of the sport so to be a two-time winner of this race is really special," acknowledged the 30-year-old Ransomville, New York star. "We started a little further back than we're accustomed to in eighth. It was tough passing, the track was super slick and hard to get a hold of. The car seemed to really settle in on the bottom and we were able to pass some cars then we had to really work on that 33 car (Willard) for awhile but were able to slip under him in lapped traffic; from there it was really just letting the car do its job. This is one of my favorite tracks in the region and always look forward to coming here."

Willard used the outside to pass pole-sitter and 2017 "Lou Blaney Memorial" winner Jeremiah Shingledecker at the start of the feature. Rudolph entered the mix when he moved into the top five on lap five. After a restart for a Colton Walters spin, Rudolph passed Rasey for fourth on lap seven then took third from Rick Regalski, Jr. following another restart on lap eight. Rudolph's next victim was Shingledecker, who he slipped under to steal second on lap 11.

Willard had set the pace out front, but by lap 14 Rudolph began to close in and was right on the leader on lap 17. Rudolph pulled alongside Willard on lap 18, but Willard continued to lead. Two laps later the side-by-side battle resumed. On lap 21, it was three-wide with the lapped car of Mark Frankhouser as Rudolph nosed ahead for the winning move.

Willard was a career best second at Sharon and earned an extra $500 from Scott Thompson of Bala Management for leading lap 10. Chas Wolbert, who has 20 RUSH Sportsman Modified wins at Sharon, went 10th to third. Shingledecker dropped to fourth. Regalski had an excellent run in fifth.

Rasey, Shingledecker, Rudolph, and Willard won the heat races over the 30-car field, while Sid Unverzagt, Jr. captured the last chance B main.

The next event at Sharon Speedway will be on Saturday, September 24 for the World of Outlaws NOS Energy Drink Sprint Cars racing for $10,000 to-win. The Gibson Insurance Agency Pro Stocks will also be on the card. Tickets are available through the World of Outlaws at https://mpv.tickets.com/?agency=WRG_SNG_MPV&orgid=52711&pid=9024779