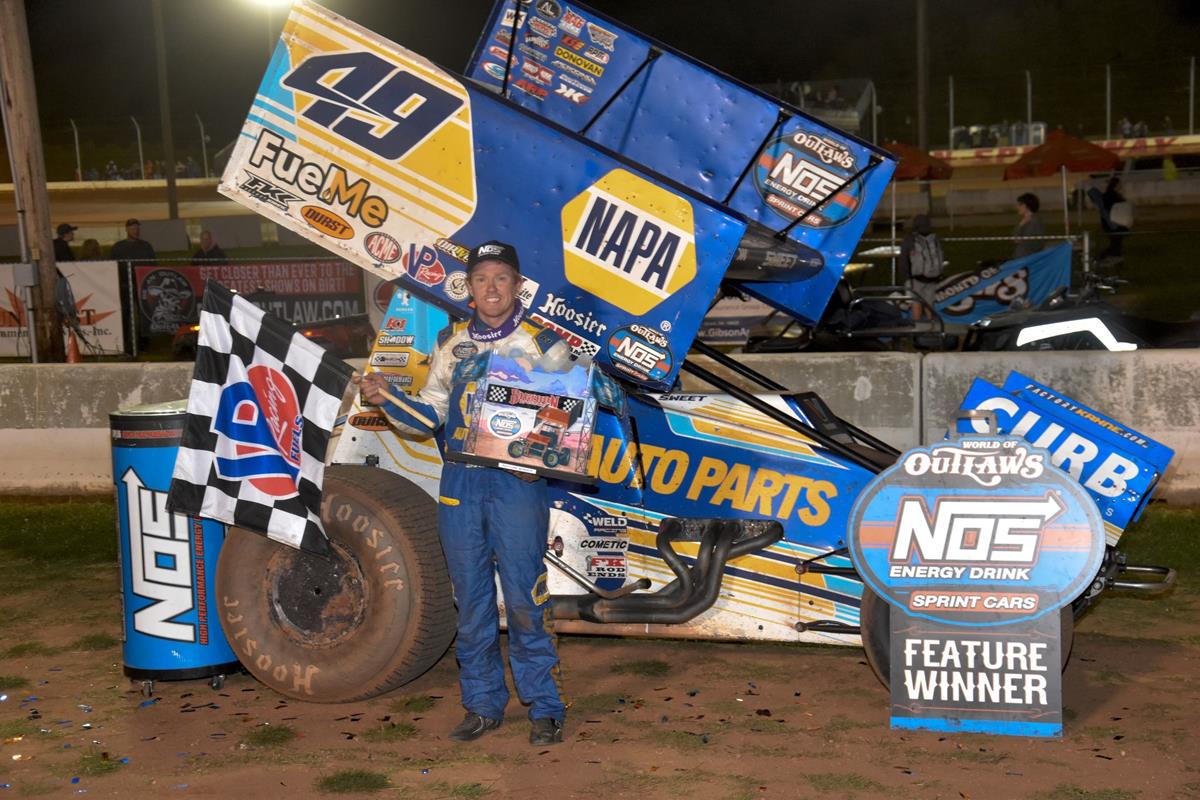 (Hartford, OH)…The 2022 season at Sharon Speedway came to a conclusion on Saturday night as the World of Outlaws NOS Energy Drink Sprint Car Series made their first appearance in the region after severe thunderstorms washed out the May 21 event. A big crowd turned out for the 16th consecutive completed event during the 93rd anniversary season. Celebrating in the Hovis Auto & Truck Supply victory lane were Brad Sweet (World of Outlaws) and Chris Schneider (Gibson Insurance Agency Pro Stocks).

The World of Outlaws NOS Energy Drink Sprint Car Series championship battle is coming down to crunch time, so naturally, Brad Sweet is beginning to thrive under the pressure. With only 10 races remaining in the 2022 campaign ahead of Saturday's stop at Sharon, "The Big Cat" chose a fine time to step up and deliver what was arguably his biggest statement of the year. The Kasey Kahne Racing, NAPA Auto Parts #49 team led all 35 laps in dominant fashion, running away with a 3.4-second margin of victory over Donny Schatz and Sheldon Haudenschild in an unchallenged romp. The $10,000 victory was the second career win at the Hartford, Ohio oval for Sweet, but first since winning the fourth annual "Lou Blaney Memorial" on July 10, 2012.

Bringing his total to five Series wins this year, the Grass Valley, California native now leads David Gravel and Carson Macedo by 96 points with another nine races left on the docket. It's clear now that Sweet controls his own destiny in the chase for a $200,000 championship payday with his fourth consecutive title.

"First things first, hats off to my crew," Sweet said after his 79th career World of Outlaws win. "They gave me a great race car tonight. I would've said you're crazy if you told me I would win pounding the boards tonight, but here we are. That is more Sheldon's style, but this NAPA #49 took off so well up there. We weren't great in the dash and rolled the dice before the feature, and thankfully, it paid off. I'm glad I could get us back in victory lane. We've had a rough year in the win column, so this one feels extra good."

Running in the second spot for the entirety of the 35-lapper was Donny Schatz, who earned his sixth runner-up result of the year in his Tony Stewart/Curb-Agajanian Racing, Ford Performance, Carquest Auto Parts #15. The 10-time Series champion was poised to lead the initial green flag from the pole position, but a caution negated his jump and allowed Sweet to pounce the next time.

"I don't know that we were missing anything tonight," Schatz said, who came up shy of his first career Sharon victory. "It was a great car, but Brad got up there first and I was too focused on trying to make the middle work to try and get him somehow. I really didn't think it would go to the top like that. My guys put a new car together before yesterday and we're off to a strong start with this one."

Rounding out the podium was Haudenschild in the Stenhouse Jr. / Marshall Racing, NOS Energy Drink #17. It was a strong rebound for the Wooster, Ohio native following a rough Friday night at Eldora Speedway which ended with a DNF following three on-track incidents.

"[Kyle] Ripper worked on it before we rolled out and we got better, but just didn't have enough tonight," Haudenschild said. "They moved those tires out quite a bit on this track and it made things a lot more difficult. You know the #15 and #49 are not going to make very many mistakes ahead of you. After the rough night we had yesterday, though, it feels great to rebound and put these guys back on the podium."

Closing out the top five was David Gravel with a fourth place finish in the Big Game Motorsports, Huset's Speedway #2, and James McFadden coming home fifth in the Roth Motorsports, Toyota Racing Development #83. Jacob Allen extended his career best streak to 13 consecutive top 10 finishes with another sixth place run aboard the Shark Racing #1A. Rounding out the top 10 behind him was leading rookie contender Spencer Bayston, sophomore runner Brock Zearfoss, hard charger Logan Schuchart, and Lee Jacobs of Dalton, Ohio with his fourth career World of Outlaws top 10.

Driving his own #22, Brandon Spithaler was the top local finisher in 14th to earn $1,100 and also picked up a $150 bonus from Mobile Bail Bonds for the first time this season. Spithaler joined A.J. Flick (twice) and Sye Lynch (once) for earning the "Bounty Hunter" bonus at the 2022 sanctioned events.

More than half of Saturday's 35-car field, 18 drivers to be exact, made their season debut with the World of Outlaws. The best finisher among that group was "The Lowrider" Dale Blaney, who ended a three-year absence from the Series with a 13th place result in brother Dave Blaney's second #10B entry.

Chris Schneider brought down the curtain on the 2022 season by winning the 25-lap Gibson Insurance Agency Pro Stock feature. Schneider, who has had a knack in his storied career for winning big events, passed Jackson Humanic on lap four and went unchallenged to the $1,000 victory in the "Fallen Drivers Tribute" presented by the Jasinski Family and Race-1.

Humanic's second place was his best effort of the season at Sharon. Scott Stiffler, who won his first career Sharon Pro Stock feature at the last event on September 2, went eighth to third. Invader Andrew Gordon charged from 14th to fourth over Bobby Whitling. After winning the last chance B main, Steve D'Apolito charged from 19th to sixth to earn a $100 gift card from Summit Racing Equipment for being the hard charger. Jordan Perkins, Josh Seippel, Jason Jones, and Paul Davis completed the top five. Winning heat races over the 29-car field were Ed Bolyard, Davis, and Schneider.